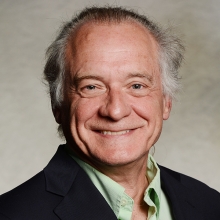 Andrew Harver, PhD is a Professor of Public Health Sciences at UNC Charlotte. He holds a bachelor’s degree in psychology from the University of Washington in Seattle, and master’s and doctoral degrees in experimental psychology from Ohio University in Athens. He completed a post-doctoral fellowship in the Department of Physiology at Dartmouth Medical School and held teaching and research positions at the State University of New York at Stony Brook. He joined the UNC Charlotte faculty in 1991 as a member of the Department of Psychology, and subsequently served as Faculty Associate in the Office of the Provost (2000-2001), Interim Associate Dean of the Graduate School (2001-2002), and founding chair of the Department of Public Health Sciences (2002-2010).

Dr. Harver’s research program results from a blend of training and interests in experimental psychology, respiratory physiology, and pulmonary medicine. His work examines the perception of dyspnea and the impact of symptoms on the management of obstructive lung disease. He has published 2 books and over 60 book chapters and journal articles; and presented about 150 abstracts, talks, and workshops at regional, national, and international scientific meetings. He has consistently involved students at all levels – high school, undergraduate, master’s, and doctoral – in his research activities. Harver maintains keen interest in research ethics and scientific integrity; the university initially secured Federal-Wide Assurance for the Protection of Human Subjects in Research in 2001 during his term as Chair of the Institutional Review Board for Research with Human Subjects. A Faculty Associate with the Center for Professional and Applied Ethics since 2002, he currently serves as a campus mediator through the University Ombuds Office.

Harver was an invited member of the American Thoracic Society Committee on Dyspnea (1995-1998), elected Chair-elect and Chair of the Program Committee for the Behavioral Science Assembly (1998-2000), and selected for the ATS Membership Committee (2001-2003). He has been appointed to the Editorial Boards of the AAEEBL ePortfolio Review (current), Applied Psychophysiology and Biofeedback, Chest, International Journal of Environmental Research and Public Health (current), Journal of Asthma (current), and Scientific World Journal. He previously served as President of the International Society for the Advancement of Respiratory Psychophysiology (1999-2000), and as a member of the National Asthma Educator Certification Board (2007-2012).

For nearly 30 years Harver has been an advocate of “writing to learn” and incorporates substantive writing activities in all of his courses, at both undergraduate and graduate levels. He is active in the university’s Communication across the Curriculum initiatives, and an adopter of ePortfolios to evidence integrative learning experiences. Harver served as co-editor of The Field Guide to ePortfolio, a publication driven by AAEEBL and released in fall 2017 from AAC&U Publications involving over 50 authors from the ePortfolio field. More recently he served as Guest Associate Editor for the collection Integrative learning in undergraduate public health education: Effective high impact practices published by Frontiers in Public Health: Public Health Education and Promotion.