A lot has changed since my first climate strike in the freezing rain back in February — I’ve swapped my beanie for sunglasses and a trucker hat and replaced my down sleeping bag with a bottle of sunscreen. Friday’s security shift at the Government Center has finally stopped eyeing me curiously, accepting that I do indeed have a permit and yes, I’ll be out here for a while. I’ve mastered the art of propping my phone up against my water bottle to document each week with a photo, and even more importantly I’ve mastered my two sentence answer to “What are you doing?” or “What even is a climate strike?” Perhaps the only conditions that haven’t changed are those dictating why I strike: our planet is in danger, the destruction is real, and I am terrified for my future.

My name is Mary Ellis Stevens, and I am a 14-year-old rising freshman at Myers Park High School. I serve as the director of Earth Uprising Charlotte and as the Vice President of North Carolina Climate Strike. I am a certified Climate Reality Leader through former U.S. Vice President Al Gore’s Climate Reality Leadership Corps, and a representative of several youth climate coalitions. I am also an Earthling who cares deeply about our home, the sphere on which we all hurtle through space together. 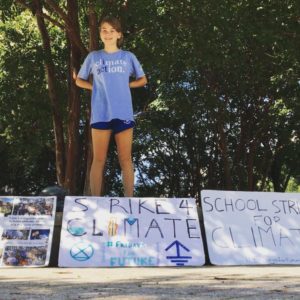 Friday, August 30th — my first Friday of high school — will mark week 21 of my strike for our climate. I strike as part of the larger Fridays for Future movement founded by 16-year-old Swedish climate activist Greta Thunberg, who was recently nominated for a Nobel Peace Prize. Each Friday students across the globe skip school and strike outside their local parliament or government office, demanding action on the climate crisis. Since February 22, I have done the same outside the Charlotte-Mecklenburg Government Center. On some Fridays, more than 2 million students have participated in peaceful protests worldwide. They do so because our generation is being raised on a dying planet and we cannot afford to be complacent. We cannot vote and we cannot run for office, so we disrupt the system the only way we can: we don’t go to school. While we may be terrified, we refuse to be helpless. If there is one thing that teenagers excel in, it is rebelling!

But it’s not just teenagers. It’s adults, grandparents, elementary school children, and college students — this movement needs everyone because everyone’s home is being destroyed. According to the latest, scientifically agreed-upon facts, we have only 18 months to enact serious carbon policies and emission cuts if we want to prevent man-made climate damage from becoming irreversible. Therefore, over the course of the next 18 months, we must do everything we can.

That’s where you come in! On September 20th, 2019, the entire world is striking. This strike is especially significant in the United States, as Greta Thunberg, the student who started it all, will be striking on U.S. soil for the first time after a two-week journey across the Atlantic on an emissions-free sailboat. Charlotte, N.C. will be joining her, and we want you to strike too! Here are five important reasons to attend:

This world needs you. There is so much work to be done. Please join us on Friday, September 20. Be the change you wish to see in the world. Do not be complacent in its destruction.

To find and join your local climate strike, go to globalclimatestrike.net. 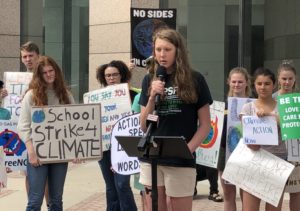