by June Blotnick and Todd Miller

North Carolinians routinely feel the impacts of climate change. Extreme weather occurs more frequently, and with it comes floods and droughts that endanger and disrupt our lives and workplaces, and cause billions in yearly property losses. Sea levels get higher along our coast, and that erodes shorelines and marshes and backs up drainage systems, causing harm to fish, wildlife as well as farms and forests. Scientists warn of more dire consequences for our state’s economy, environment and people—including to people’s health—if no action is taken or action is delayed.

That is why our organizations, Clean Air Carolina and the North Carolina Coastal Federation, are urging the state to take action against harmful climate change. With the help of our lawyers at the Southern Environmental Law Center, we filed a petition for rulemaking with the N.C. Environmental Management Commission (EMC) asking it to join other states in a cooperative effort to reduce heat-trapping carbon dioxide emissions from power plants. 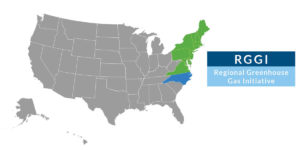 The petition filed with the commission outlines a proven, cost-effective approach to limit and reduce heat-trapping carbon dioxide emissions from power plants by participating in a regional emissions-trading program. Under the proposal, the state would establish a carbon dioxide emissions-trading program and participate in the existing Regional Greenhouse Gas Initiative (RGGI) implemented by states from New England south through Virginia. In the RGGI program, if a power plant emits carbon dioxide, it has to buy an allowance for each ton of carbon dioxide pollution it produces. Allowances can be bought and sold in a regional auction, which gives power plant owners flexibility and helps to keep costs down. The number of available allowances is reduced over time to reduce pollution.

Reducing climate pollution in North Carolina will protect the health of our communities and the environment, while spurring the creation of clean energy jobs. States already participating in RGGI saw carbon dioxide emissions from power plants drop 47% over the last decade. With that reduction in pollution came fewer premature deaths, hospital visits, and lost work or school days, associated with asthma and other respiratory illnesses, strokes, and heart attacks. A similar approach was successfully used a few decades ago when acid rain plagued the United States, harming and killing fish, wildlife, and forests. That issue is now largely in the past thanks to a trading program for nitrogen oxides and sulfur dioxide, the primary causes of acid rain.

Governor Cooper recognizes the need for North Carolina to significantly reduce greenhouse gases in the next nine years. His administration has adopted a goal of reducing carbon dioxide emissions from the power sector by 70% by 2030, reaching net zero emissions by 2050. Duke Energy has announced carbon reduction goals of its own, also aiming to reach net zero carbon by 2050.

Now is the time for our state to turn those goals into action and join other states to limit heat-trapping carbon pollution. Our petition filed before the commission by the Southern Environmental Law Center is a proven approach to achieve these goals so that Duke Energy and North Carolina safeguard our climate to ensure a brighter future for our children and grandchildren.

Editor’s note: This article originally appeared in the News & Observer on January 21, 2020 at https://www.newsobserver.com/opinion/article248637935.html and is reprinted here with permission.