by Joel Porter and Andrew Rasetti

The North Carolina House of Representatives has passed legislation that is supposedly in response to climate change; in reality, it would derail our state’s transition to a clean energy economy. The bill, HB 951, fails to even mention the words ‘climate change.’ It does, however, acknowledge that the economic conditions for coal are unsatisfactory to North Carolina ratepayers and that those conditions are likely to continue on the same downward glide-path for various reasons.

Rather than opening North Carolina’s markets to competition that will supply our state with more clean, affordable, and reliable energy, HB 951 limits the growth and attractiveness of our state to new clean energy businesses. Moreover, it prescribes, and locks in specific fuel sources (i.e. gas) for at least the next decade.

The bill is now being considered by the North Carolina Senate.

TAKE ACTION: Urge your State Senator to vote NO on HB 951. 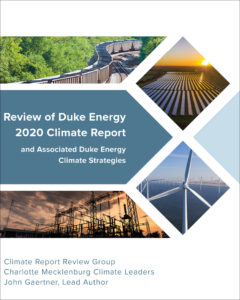 Over a year ago Clean Air Carolina joined a group of interested advocates and began discussions with Duke Energy about their climate goals. In full and close consultation with the company, we issued a report that laid out various strategies that would help Duke Energy both meet its publicly stated climate commitments and remain economically competitive. We also collaborated with Duke Energy on a joint webinar related to those goals, and agreed – at least in principle – to a few areas that they would like to continue to collaborate on.

Unfortunately, the bill that was recently unveiled from closed-door negotiations that excluded key stakeholders doesn’t accomplish anything for anyone – it’s bad for our economy, it’s bad for the environment, and it’s bad for our state. In its current form, the bill only partially addresses two of the eight recommendations we’ve proposed. An analysis of the bill, and the ways it addresses (and doesn’t address) climate goals, can be viewed here.

Duke Energy has a chance to make North Carolina a leader in decarbonization and pollution reduction. But so far, instead of utilizing their clout in the State House to benefit our state’s economy and environment, they’ve used their influence to support their preferred fuel sources at the expense of ratepayers and the climate.

Clean energy sources can already compete on par with mature fossil fuels. If lawmakers are serious about meeting climate goals, they should restructure this bill to minimize (and cease) the use of fossil fuels as soon as possible, increase market access to clean energy providers, and begin a transparent process of seeking stakeholder feedback from the environmental community and other key constituencies in the state.

And while this all plays out, the state should keep moving forward on a proven way to reduce emissions: the Regional Greenhouse Gas Initiative.