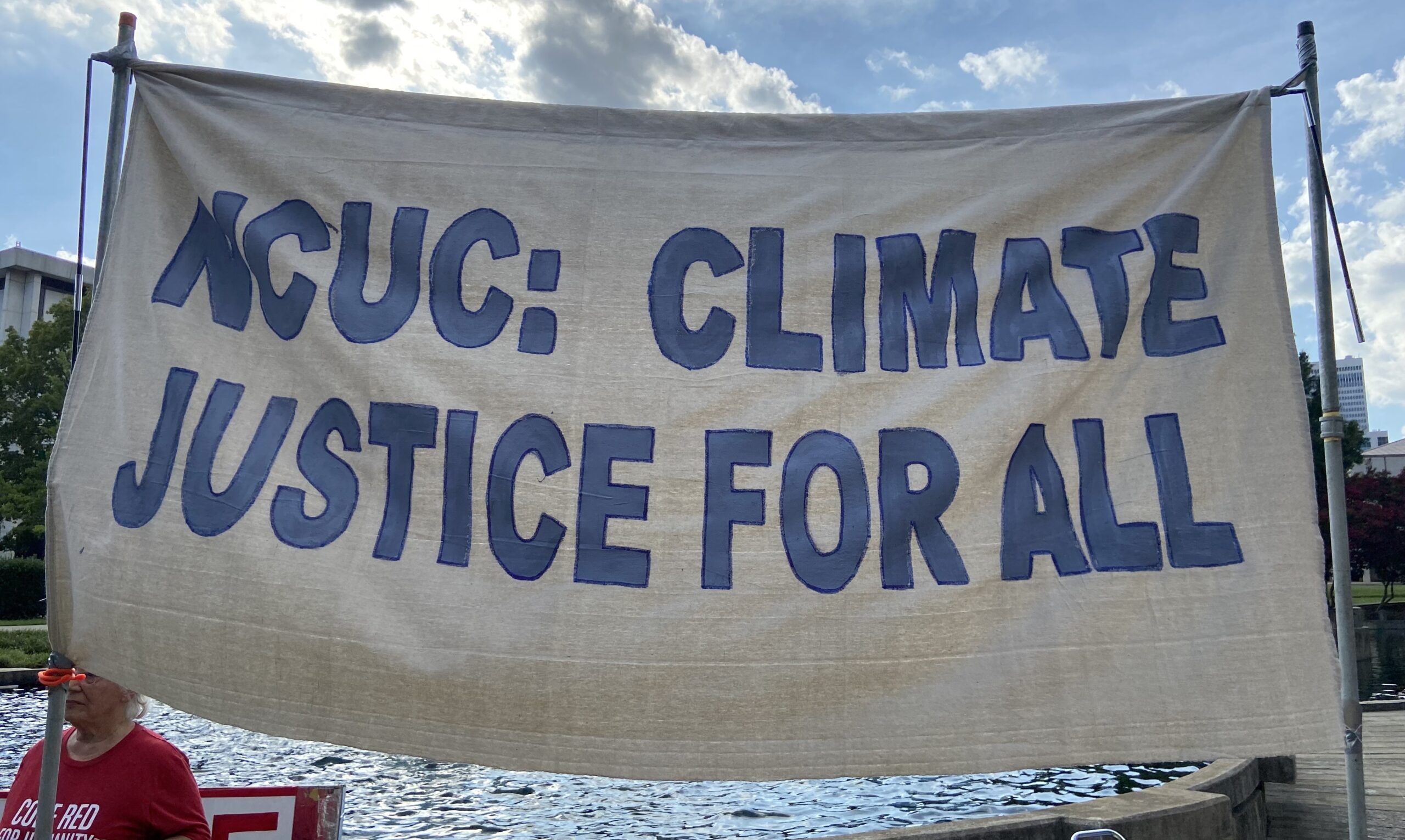 On a sunny day in late July, with the temperature soaring into the 90’s and the heat index well over 100, Charlotte climate activists gathered in Marshall Park. They came to call attention to the climate emergency and to demand the NC Utilities Commission reject a draft Carbon Plan submitted by Duke Energy that is heavily dependent on gas and coal well into the 2030’s. Similar crowds had gathered earlier in July in Asheville, Durham, and Wilmington, as people from across the state came out in support of a clean energy future. 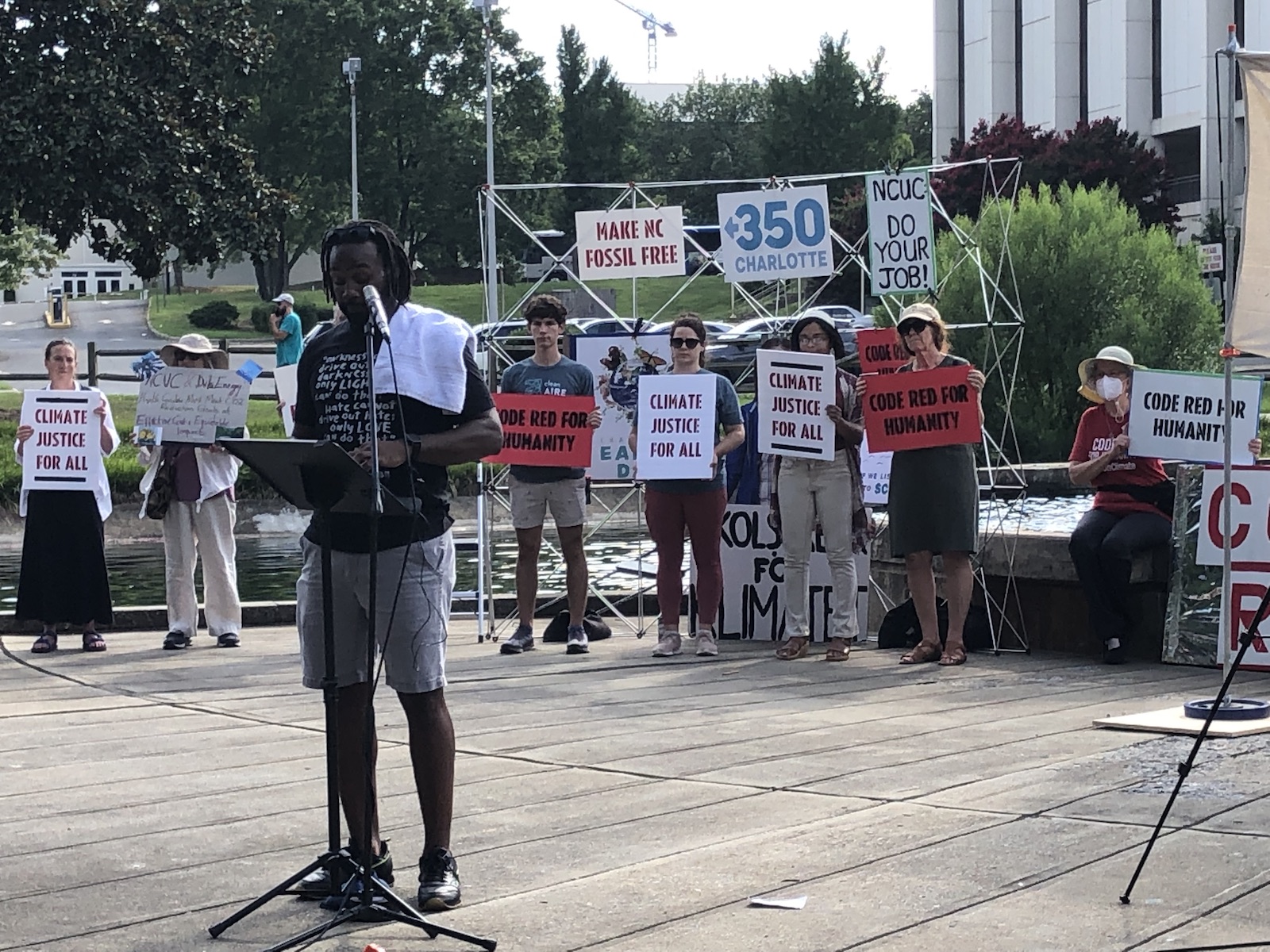 Speakers at the Charlotte rally emphasized the need for a Carbon Plan centered on environmental justice and equity. Dirty power plants are all too often located near Black and Brown communities, driving disproportionate health impacts caused by fossil fuel burning. Many speakers, including Corine Mack (NAACP, Charlotte), John Harvey (NC League of Conservation Voters), and Ren Martin (NC Interfaith Power & Light), called for greater involvement in the Carbon Plan process by those most impacted by climate change. Other issues raised were the high energy burden felt by low-income consumers, the resulting health risks linked to a lack of air conditioning, and increased energy rates due to expanded investment in gas plants that may end up as stranded assets. 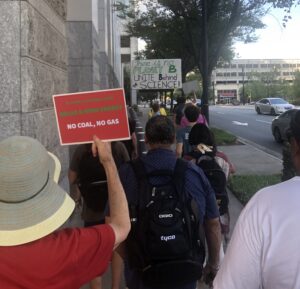 The rally soon became a parade down the handful of blocks from the park to the Mecklenburg County Courthouse, as we held signs and banners and chanted for an end to dirty coal and gas. Soon it was time for the public hearing to begin. Roughly 100 people filled the courtroom to give and listen to public testimonies to the four NC Utility Commissioners in attendance. 22 of the 35 people who spoke were women, including myself, former Charlotte Mayor Jennifer Roberts, Rev. Amy Brooks, Sunrise Charlotte Leader Hannah Stephens, and Charlotte psychologist Meg Houlihan, among many others.

Many speakers urged the Utilities Commission to show bold leadership and hold Duke Energy accountable for the delayed transition away from fossil fuels they proposed, particularly as we face an increasingly warming world. The clear and present danger of the climate crisis and its impact on younger Americans was a common topic. More than a few speakers expressed concerns about the impact the crisis is having on the mental health of our children and young adults. A recent study of young adults found that 45% were negatively impacted by thoughts about climate change on a daily basis. We heard from many women whose own children have decided not to have children of their own, given the likelihood that they will be faced with a potentially unlivable planet.

Some speakers noted a recent report from the London-based think tank InfluenceMap, which ranked Duke Energy 17th among 25 U.S. power companies for reducing carbon emissions. Rankings that low were read as “a misalignment” with the climate goals set in Paris—the same goals that got a North Carolina climate bill passed last fall with bipartisan support. Duke can and must do better.

In my comments, I urged the commission to consider the ongoing campaign to have our state join the Regional Greenhouse Gas Initiative. Including this complementary regulatory strategy would ensure reduced emissions on an annual basis, avoid costs associated with increased use of fossil fuels, and provide important public health benefits.

Charlotte was the last of the four in-person public hearings on the Carbon Plan, but their are still plenty of opportunities for us to raise our voice and be heard. The NC Utilities Commission is holding two virtual hearings on Tuesday, August 23 at 1:30 pm and 6:30 pm. Each time slot will be limited to 20 speakers, so if you are interested I recommend you register now. We need to fill all forty slots with North Carolinians committed to working for a Carbon Plan that reduces carbon emissions as quickly as possible, while minimizing costs and ensuring equity.

You can also submit written comments telling the NC Utilities Commission you want a strong Carbon Plan centered around clean energy and people, not dirty fossil fuel and polluter interests.

​​These next few months will be transformative for our state’s energy future. Don’t give Duke Energy the final word on how North Carolina cuts carbon. 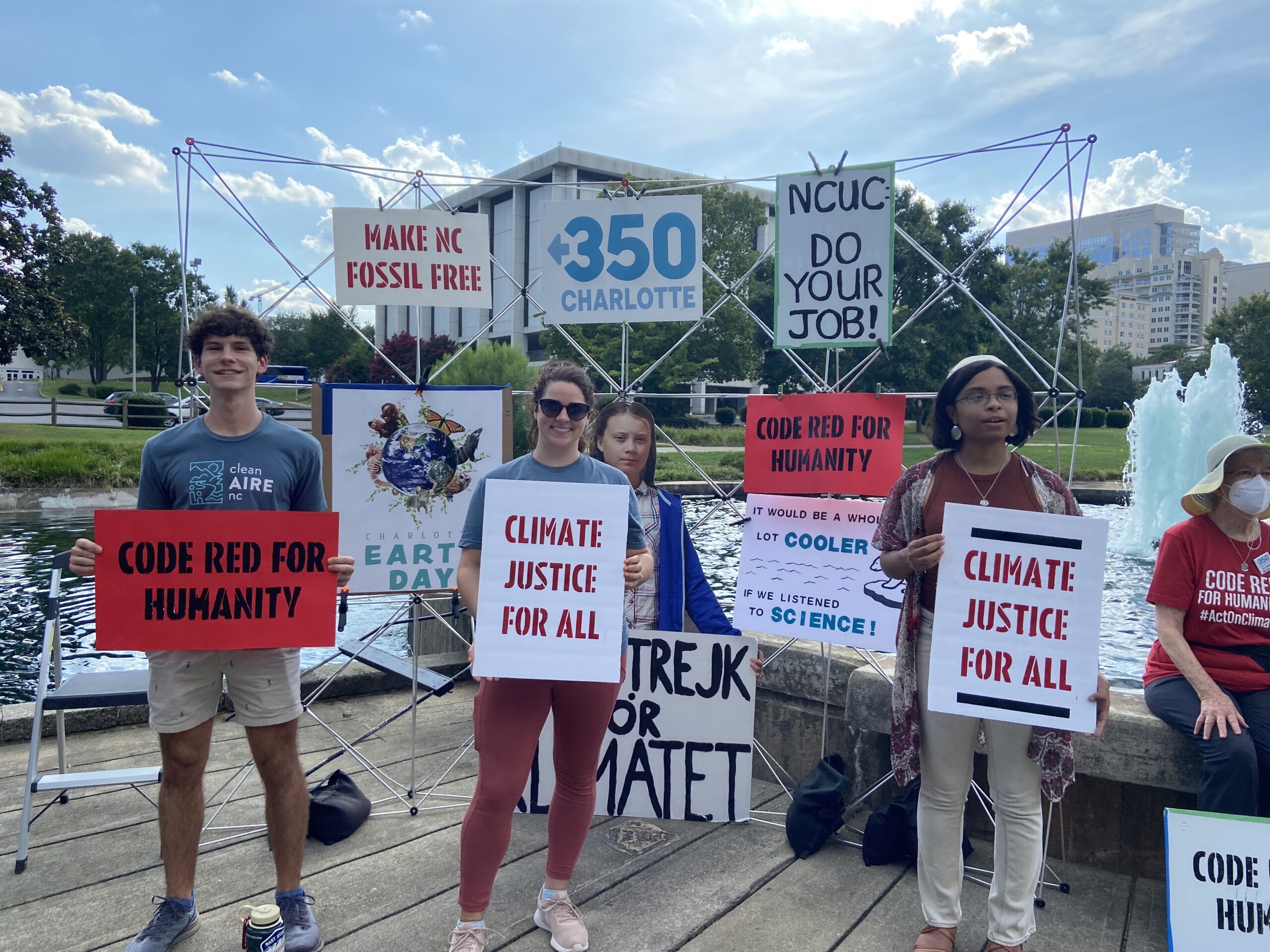